We will soon bid farewell to Bedford Heights Maintenance Manager, Deane Fine, who has worked here at the Bedford Heights site for over 30 years. Deane will be joining his wife Roni who also works at Bedford Heights on Reception, leaving later this month for early retirement.

After what sounds like an incredible stint here at the Brickhill Drive site, we wanted to share more on Deane’s time here over the past 30 years. 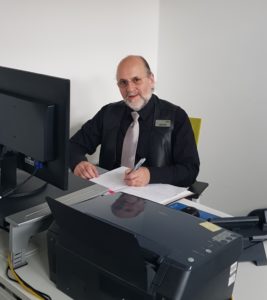 Deane left school at 16 and started a 5 year apprenticeship as an Installation Electrician and then stayed with the company as a Site Manager.  This was unfortunately short lived and having just taken out his first mortgage in 1990, he was then made redundant.

Not one to remain idle, he obtained a temporary job through the Manpower agency and that brought him to this building, working for the original owners, Texas Instruments.

After receiving a Long Service Award from Manpower, he was finally employed directly by T.I. starting 1st April, but it was no April Fool’s joke when they announced their closure before he’d even received his first month’s pay packet!

The management of the site decided to form a company called Power Innovations to continue the manufacture of the semi-conductors previously made by T.I. Power Innovations who took over part of the building and Deane continued to work for them. After 3 years of negotiations they were able to purchase the patents from T.I. for the devices that are still made today.  That company proved successful and several years later, was bought by the American company Bourns Ltd. and Deane continued in maintenance for them until, in 2002, there were talks of redundancies.

Deane rose to the challenge and stepped into the role of Maintenance Supervisor and took on the day to day running of the site at very short notice. His employment continued when Carisbrooke took over, and again when Verve Developments Ltd bought the building in 2014.

His role morphed to Maintenance Manager and the team grew to include Gavin and Judah.  He has built up a huge bank of knowledge of the workings of the building over the 30 years he has worked here.

Deane has seen many changes to the building through the years, but it is with Verve that the more significant changes have taken place, turning it into this current modern complex.  He’s had many a challenge with the building and its workings and no two days have ever been the same.

Along the way he met his wife when she was working in the building for the NHS back in 2003. She joined the Verve team as Receptionist in 2018. When she decided retirement was calling her, Deane decided to do the same even though he has 4 years left before he officially becomes a pensioner!

Though looking forward to a less challenging life, he admits it will take some time before he can mentally sever the connection of 31 years in the same building. He will also miss many of the tenants and the banter involved between them and the Verve team, but he is determined to enjoy life!

We wish you both a very happy and relaxing retirement together.

Today is Windrush Day, a day which honours the Bri

Are you in need of a flexible workspace? 💻 The

Congratulations to @schoolreaders on reaching 25,0

Have you tried a class yet @vervewellnessstudiobed

The Queen's Awards for Enterprise are the most pre

We’re so lucky with the beautiful outside spaces

ALPHAS at @uniofbeds have partnered with SEMLEP’

Our Texan Garden is OPEN! We’ve opened our garde

Today is Windrush Day, a day which honours the Bri

Are you in need of a flexible workspace? 💻 The

Congratulations to @schoolreaders on reaching 25,0

Have you tried a class yet @vervewellnessstudiobed

The Queen's Awards for Enterprise are the most pre

We’re so lucky with the beautiful outside spaces

ALPHAS at @uniofbeds have partnered with SEMLEP’

Our Texan Garden is OPEN! We’ve opened our garde

This website uses cookies to improve your experience while you navigate through the website. Out of these, the cookies that are categorized as necessary are stored on your browser as they are essential for the working of basic functionalities of the website. We also use third-party cookies that help us analyze and understand how you use this website. These cookies will be stored in your browser only with your consent. You also have the option to opt-out of these cookies. But opting out of some of these cookies may affect your browsing experience.
Necessary Always Enabled

Any cookies that may not be particularly necessary for the website to function and is used specifically to collect user personal data via analytics, ads, other embedded contents are termed as non-necessary cookies. It is mandatory to procure user consent prior to running these cookies on your website.