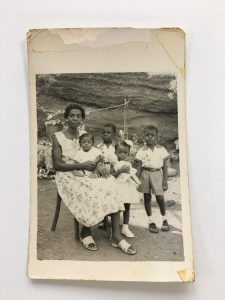 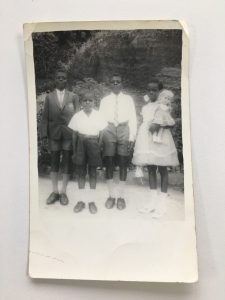 Left: Yolande with his Mother and siblings, pictured in Grenada
Right: Yolande (3rd from left), age 13, pictured with his siblings before coming to England

October is Black History Month, a time to recognise and celebrate the contributions made by people of African and Caribbean descent. Yolande Lewis, Maintenance Engineer at Bedford Heights, emigrated to England from Grenada in the late 1960s with his two brothers and sister, and talked to us about his memories of growing up in Grenada and coming to England.

“My Father came to England first in 1959 and then my Mother followed in the early 1960s. They were part of the Windrush generation travelling by boat, a journey which took around two to three days. I believe the boat was SS Windrush.

After the Second World War people came over to England usually to work in the NHS, and on the buses and the railways. My Father worked for an engineering company in Bedford and my Mother for the hospital.

I stayed in Grenada with my brothers and sister and we were brought up by our Grandmother.”

What are your early memories of living in Grenada?

“We grew up by the seaside in Grenada and it was always hot. We would always be at the beach out in the fresh air.

I always remember my Grandma’s cooking and all the fruit we would usually eat. We grew the fruit and veg where we lived which we used in the cooking. We were a close knit family and usually would just be with family, out playing and left to our own devices.”

When did you emigrate to England?

The weather was the main shock when coming to England, it was September but felt freezing cold compared to the Grenadian weather I was used to, which was around 30 degrees over there.

Everything felt so big over here, as Grenada is a small island only 20 x 30 miles, and only 90,000 people on the island at the time which is a similar size to the population of Bedford.

The layout of houses and the streets were so different to what we were used to. All the houses are close together and we would often get lost with the street layouts here.

When I moved to Bedford I started at Pilgrims School and then after leaving school started an apprenticeship with WH Allens in engineering.

I joined Texas Instruments in the 1980s with various stints here and worked building microchips at the time.”

Living in Bedford and family life

“My parents both still live in Bedford, my Father is 95 and my Mother is 85.

I love Bedford but miss the warm weather of Grenada. My ideal way of life would be to visit Grenada in the winter and stay in Bedford for the summer. I love all sports: cricket, football, rugby and motorsports, and I’m a big Lewis Hamilton fan.

I am also on strict instructions from my two children that when I retire, I’m then on grandchildren duty. I have five grandchildren from age 1-18. I’m a very proud grandad as my 18 year old has just started university in Leicester.”

Our thanks to Yolande for talking to us and sharing his wonderful memories.